One year ago we found that using the Word 2003 XML format could by very usefull for pentesters/redteamers/attackers as a standard VBA meterpreter payload was scoring 1/57 on VT (instead of 20/57 using the Office OpenXML format). AV vendors made their homeworks, VT score is now 14/54

Anyway another very simple trick can help a lot: by embedding the exact same file (xmhell.xml) in a new word document and saving it as a Word 2003 XML again you’ve got a 0/54 on VT ! Oh yeah !

2 months after submitting our payload on VT, the file still scores 0/56…

It seems that AV don’t like russians dolls, even Kaspersky and yet it contains a straight meterpreter payload (without encoding) which is normally catched.

Ok, but pwning a victim by this trick is not so obvious: 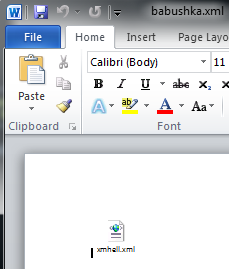 2. then open the xmlhell.xml file that is embedded and then accept a first warning:

What about sandbox analysis ?

But not the babushka variant:

What about a quick and dirty static analysis with olevba and oledump ?

Oledump catches VBA in xmhell.xml but we already knew that:

But that’s not the same story for babushka.xml:

That’s all for now, happy hunting and happy pwning !